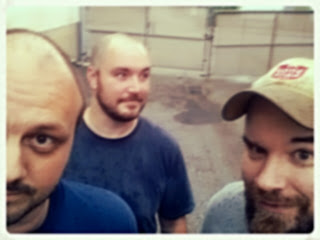 ASM A TIK is a newish Louisville band featuring Nathan Smallwood (Straight A's) on 10-string Warr guitar, Sean Roberts (Straight A's) on drums and Brian Foor (previously of Gaj Mustafa Cell and the Brian Foor Orchestra aka FOOR) on keys and sax. The trio takes its influences from 70's German jazz, film music, Crimson-esque prog, new wave and punk.  ASM A TIK, in collaboration with Noise Pollution, will be giving away a FREE 3 song demo CD when they play this year's Cropped Out festival.  The demo will be packaged in mini-reel to reel tape boxes that will include the CD plus other goodies.  There will only be a limited run of the demo's physical copy, but it will be available after Cropped Out as a free download on our website.

STRAIGHT A's will be returning after a nearly two year absence with the release of their second album Humility the Hard Way.  Humility is a 15 song LP on yellow/orange vinyl that continues to expand on the unique sound established by the A's on their previous LP Self Help and split 7" with Prideswallower.  The amazing cover art was drawn by Carrie Neumayer and colored by the A's Andrew Padon. The release show will be at The Mag Bar (1398 S 2nd St.) on Saturday, Oct. 12 with new post-punk outfit XOX opening.  Doors at 9:30.  $5 cover.  Welcome back, fellas.

And finally, we're very pleased to announce that we will be releasing the debut album from JULIE OF THE WOLVES titled Create/Destroy.  We've worked with the members of JULIE OF THE WOLVES in past bands Minnow, Second Story Man, Madame Machine and Venus Trap, so it really is a pleasure for us to get a chance to work with these fine folks again.  JULIE played their first show in March of 2012 and have been busy playing out since with such bands as Black God, Old Baby, Freakwater, The Debauchees, Dane Waters, Parlour and more.  This 9 song album was recorded with  Trip Barriger at Treehouse Audio and was mastered by Brian Lueken at Decibel Mastering.  Cover art was created by JULIE OF THE WOLVES' own Carrie Neumayer.  The album release will take place at Zanzabar (2100 S Preston St.) on Friday, November 1st with TWENTY FIRST CENTURY FOX.  The band also just created their tumblr page which you can check out here.


Posted by NOISE POLLUTION at 1:24 PM No comments: