Nice piece on Jason Noble in Velocity's music issue this week. Jason talks about his time in King G and J Krew, Rodan, Rachel's and Shipping News.
Posted by NOISE POLLUTION at 4:03 PM No comments: 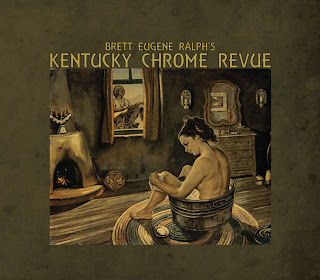 Brett Eugene Ralph's Kentucky Chrome Revue will be celebrating the release of their first album with a show at the Nachbar (969 Charles Street) on Friday, March 5th. Also on the bill for the release show will be Black Nasty out of Austin, TX and Thomas A. Minor & The Picket Line. Tickets are available now at the Nachbar for $8, but will be $10 day of the show.

We've had the pleasure of working with Brett, albeit in a limited fashion, on the Bold Beginnings project a few years back and are thrilled to now be helping the Kentucky Chrome Revue album see the light of day. The album features a host of guest performers including such luminaries as Will Oldham, Catherine Irwin (Freakwater), Jason Loewenstein (Sebadoh), Jolie Holland, Wink O'Bannon and Peter Searcy. It was recorded with Paul Oldham at his farmhouse studio in Shelbyville and features ten songs including a honkytonk version of Iggy & the Stooges "Your Pretty Face is Going to Hell." Brett's debut book of poetry, Black Sabbatical, was also released this past year and can be ordered from Sarabande Books.

The Kentucky Chrome Revue will also be performing with the great Antietam at Bruar Falls (in Brooklyn) on March 28th. This will be the first time Brett has shared the stage with Tim and Tara since 1982. We'll post pictures and/or videos here when and if they show up.
Posted by NOISE POLLUTION at 11:57 AM No comments:

Reviewing EPs can be a tricky proposition — does one afford the same considerations of scope and gravity typically associated with a full-length? If you’re dealing with one of the format’s undisputed masterpieces (Signals, Calls and Marches, Chronic Town) you certainly do, and if Clatter & Jive doesn’t quite reach the heights of those landmarks, it’s still an effective, concentrated blast of energy much weightier than its three-track length would suggest.

The band includes Lucky Pineapple guitarist Matt Dodds, but that band’s expansive experimental rock is miles away from The Teeth’s lean, jagged post-hardcore. Best is “Huevos Cubanos,” a down-tempo instrumental that contrasts the band’s other Archers of Loaf-style compositions without stealing their power. Rarely has both a band’s name and the title of their record been so appropriate.

- Eric Condon
Posted by NOISE POLLUTION at 4:23 PM No comments:

Screaming Secrets finds Second Story Man flexing every muscle they have. “Clocks” is my favorite (next to the more personal but more powerful “Traffic Jams”), but that’s because of my hard-rock bias (and Carrie Neumayer’s bad-ass scream). When they want to get loud, you better believe they will, and when they want to fully develop a sound or song, they’ll do that, too.

It isn’t hard to tell that this well-organized, coherent album took more than a year of work: Auxiliary banjos and violins don’t seem haphazard; rather they accentuate each song’s specific goals. SSM’s service of the song — no matter how different, harmonic or twangy it needs to be — is the band’s most refreshing characteristic. They fill each tune with every twist, turn and texture necessary, make any genre work for them, and tie it together with signature vocal harmonies. This album deserves all the attention it can get.

- Pawl Schwartz
Posted by NOISE POLLUTION at 4:21 PM No comments: