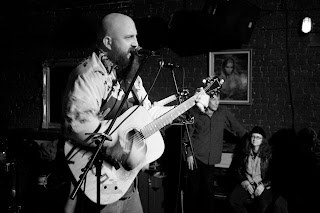 Traditional sounding, with its stately fiddles, close harmonies and Americana-rooted melodies, Brett Eugene Ralph’s Kentucky Chrome Review is, like all country worth listening to, nonetheless wildly unconventional and rebellious. There’s no moral certitude, no just desserts in these songs. It’s country without the god and patriotism, a non-judgmental peephole into landscapes of teenage strippers, abusive fathers, murderous boyfriends and unfettered, unglamorous dissolution. “Kentucky Chrome,” the first and best of these songs, compresses a novel’s material into its terse, hard-bitten lines. Its down-and-out heroine haunts stripper joints and biker bars, her downscale native habitat drawn in bleak lines and edged with a certain black humor. The girl, who is never named, is doomed from the start (“She could have used a few more years between teddy bears and tittie bars/she could have used a lock on her bedroom door”) but the song wastes very little sentimentality on her. Even when she tries to kill herself and fails, late in the song, the emotional temperature stays mordant and sardonic. In a life that’s a continuous failure, failing to OD is just one more setback, which Ralph marks by advising, “Don’t sweat it, baby, it ain’t like we’re building Rome.”

Ralph, who got his start in the Louisville hardcore band, Malignant Growth, is a poet as well as a songwriter, and his lyrics often pull you up short, as good poetry does. He uses plain-spoken words in combinations that seem, at first, to be unstudied as speech, rough, echoing the dialects of rural Kentucky poverty. Take any line of “Grandpa Was a Hobo” and the language sounds workmanlike and unremarkable. Yet take the song as a whole, and you begin to see how these short lines coalesce into a psychologically nuanced description of three generations of family dysfunction. There is the boy, the narrator, who wonders why his father beats him. There is the father, left at a young age with a woman not his mother and unable to express love for his own son. There is the boy’s mother, making excuses for a distant father to her son. Finally there is the near-mythical grandfather who started the whole story. None of them get more than a few lines or merit flowery description, yet the song is exact and accurate and all the more powerful for what we are left to assume.

Several of these songs could be short stories — or even the basis for novels — but one of the strengths of this album is that they are not. Instead they are fully realized songs, whose music is nearly as striking as the lyrical content. For this recording, Ralph gathered more than 20 musicians, many of them considerably better known than he is. It’s Will Oldham’s voice, unmistakably, singing the lines in “Kentucky Chrome Review” that describe the girl’s failed overdose, and Catherine Irwin of Freakwater entwined in harmonies with Ralph, in the closer “The Whole of the Law.” Jason Loewenstein from Sebadoh plays drums on all 10 tracks, and wherever you hear a country fiddle, it’s Paz Lenchantin from A Perfect Circle. Eleventh Dream Day’s Wink O’Bannon kicks in a couple of smoldered blues guitar solos.

Despite all the big names, the arrangements sound loose and casual, like a bunch of old friends playing together (which, in fact, many of them are). There’s a sweetness in the arrangements that wraps around the songs, easing their tensions and making these masterfully unsettling narratives into something that is, at least on the surface, reassuring. It’s the wild intelligence and burnt-black humor that pulls you into the songs, but the musical warmth and homeliness that invites you to stay.

Posted by NOISE POLLUTION at 2:52 PM