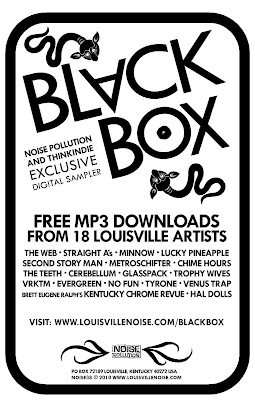 In partnership with ThinkIndie.com, this FREE digital download is a 17 song sampler of what we've been up to the past few years. Songs by Evergreen, Metroschifter, Straight A’s, Second Story Man, Lucky Pineapple, The Web, The Teeth, Minnow, Brett Eugene Ralph's Kentucky Chrome Revue and more. Download it and pass it along to your friends. Go to www.louisvillenoise.com/blackbox
Posted by NOISE POLLUTION at 7:06 AM No comments:

Minnow in the studio 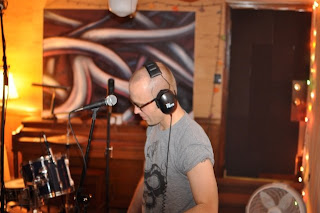 UPDATE:
Just got word that the new Minnow album will be titled "Hello Hubris." Look for it October 2nd.

We're very stoked to report that Minnow began recording the followup to 2008's Thirteen Wrongs this past weekend. The as yet untitled 8 song album is being recorded by Trip Barriger at Studio K and will be released in October. We had a chance to hear a few tracks in progress and it is sounding awesome. More details to come soon...
Posted by NOISE POLLUTION at 2:04 PM No comments:

From John Carswell at the Sweet Georgia Breezes blog:

Having grown up in Louisville, I’m astonished to say that while I have known of Second Story Man for years now, their third long player SCREAMING SECRETS is my first full length exposure to the band. I’m not really sure why. As a 90′s scene kid, I was a fan of the members’ work in bands like Itch House and The Flats, but for whatever reason, Second Story Man have managed to hover just below the national radar for 12 years now. While they have toured occasionally with the likes of Shipping News and Sebadoh, they have otherwise contented themselves with churning out apparently masterful noise pop records whenever the mood strikes them. So unfortunately, I can’t really speak to Second Story Man’s growth as a band, but I can attest to the fact that this is a marvelous record that will most likely go tragically under-recognized. SECRETS succeeds by finding a Beatles-esque middle way between the ultra-dynamic river city indie of hometown greats like Slint and Rodan and the scrappy indie pop of early 90′s Chapel Hill bands like Superchunk and Polvo. While opener “The Want Within the Need” and A-side closer “Traffic Jams” attest that the band can rock at full-power, I find myself continually drawn to the lilting and lush “Quietly” and the pastoral acousti-pop of “Suicide Dream.” Elsewhere, the dissonance of “Flies” recalls Murray Street-era Sonic Youth, and “The Mav” best exemplifies the band’s powerful dual vocal approach. Given the overall quality of SCREAMING SECRETS, I’ll definitely search out the band’s back catalog. Having grown into this record over the last few months, I can entusiastically say that it’s high time the world get to know Second Story Man.
Posted by NOISE POLLUTION at 10:54 PM No comments:

The Web in this week's Leo 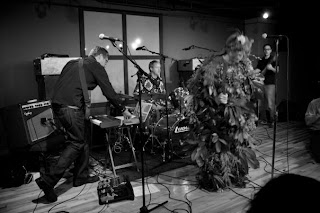 Make sure to check out the feature article on The Web's album release in this week's Leo.
Posted by NOISE POLLUTION at 1:57 PM No comments:

Brett Eugene Ralph made his initial splash in Louisville back in the 1980s as lead singer of the punk outfit Malignant Growth (still one of the great punk band names of all-time, by the way) before taking time off to get a college degree and reinvent himself artistically.

Ralph became a poet and is now a writing instructor with a book of poetry on the market. His new musical persona, however, is decidedly folk-country, and the new britches fit Ralph nicely. According to the band's press notes, the goal when forming Kentucky Chrome Revue was to blend Rolling Thunder Revue-era Bob Dylan with 1970s outlaw country effectively enough to be considered "the MC5 of country music." Nice.

With all that noted, it's no surprise to pop a CD in one's player and hear songs like "Grandpa Was a Hobo" and "Your Pretty Face is Going to Hell."

Interestingly, the beautiful arrangements herein are matched by the musicianship presenting them and the sparkling, sweet production. It's quite an aural pleasure. But it's best enjoyed when listening carefully to Ralph's lyrical poetry. While he isn't the smoothest singer in town, he delivers his stories with warmth and intent.

Songs like "I Cry Easy" sound like radio hits in the making thanks in part to the hook, carefully arranged vocals and guitar work. But the soft chorus is interspersed with some startling lyrical imagery and clever and subtle humor. It's a complete package.

It doesn't hurt matters that the project is a star-studded affair with contributions by Will Oldham, Catherine Irwin, Peter Searcy and Jolie Holland, among many others. A definite win for the punk-turned-poet. Expect more to come.

Posted by NOISE POLLUTION at 1:51 PM No comments:

From the fine folks at OMG Vinyl...

I have to say, we get unbelievably lucky with the quality of records that show up for review. Second Story Man is a Louisville band that has been around for over 10 years, and you can hear the experience in their music. Having toured with bands like Sebadoh and Shipping News, you can hear the wonderful 90’s sensibility that us old folks all yearn for in our rock music. It’s basically a record full of lush, awesome male/female rock and pop, and who doesn’t need more of that?
Posted by NOISE POLLUTION at 1:46 PM No comments:

The best album to come out of Louisville since Young Widows’ Old Wounds. Deft songwriting coupled with a penchant for fuzz, electronic sounds and guitar pedals somehow doesn’t end up sounding like your high school jam band. Self Help showcases a unique knack for ruckus indie-core along with a penchant to experiment, but without straying uncomfortably far from the Louisville hardcore heavy syncopated bass/drums sound. That said, this album is heavy in a whole new way, with arrangements a la Dischord, horns and choruses that verge on the divine (see “Up All Night”). Straight A’s aren’t trying to vie for your attention; they deserve it, because of their weird, squealy message and a grip on exactly how to say it.
- by Pawl Schwartz
Posted by NOISE POLLUTION at 1:39 PM No comments: