The Web to play Boomslang Fest 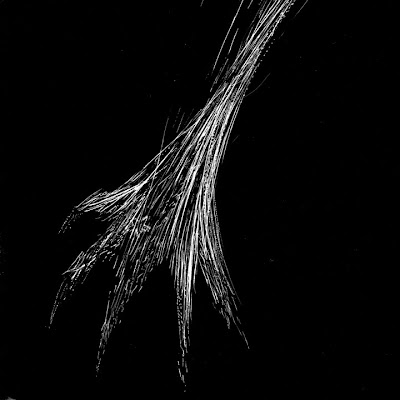 THE WEB will be performing at this year's Boomslang Festival in Lexington, KY. The band will be on Saturday, September 11th's bill along with Death (from Detroit), Warmer Milks, Thee American Revolution and Phantom Family Halo among others. The Web will be playing the front room of Buster's around 7 or 8pm. Rumored to be joining the band on this performance are the wonderfully talented David Bird and Mike French. Also, the first edition white vinyl pressing of The Web's new album Clydotorous Scrotohendron is almost gone, but we now have fancy "coke bottle green" vinyl available. Check it out the awesomeness... 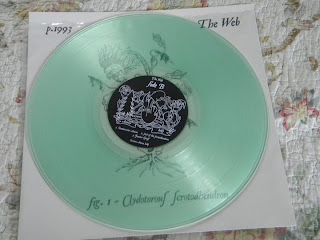 Posted by NOISE POLLUTION at 1:47 PM No comments: 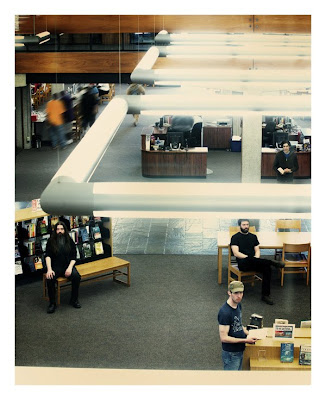 Noise Pollution is honored and beyond stoked to announce that we, along with our pals at Karate Body Records will be releasing the U.S. version of the new SHIPPING NEWS album titled "One Less Heartless to Fear." The release date will be November 16th, but the first single "The Delicate" will be available as a digital download starting on August 16th. You can check it out in the video clip below. The album was recorded by our old friend and longtime Noise Pollution compatriot Brian Lueken along with Tim Iseler and Kevin Ratterman (the vinyl was plated by Bob Weston). Album and single artwork was created by the most excellent Dan McCarthy. The official press release is as follows:

Shipping News will release a new LP/CD called "One Less Heartless ToFear" on November 16th, 2010. It's their first new full length album since "Flies The Fields" (2005) and a helluva lot has happened in the last five years. Two weddings, fatherhood, serious illness, a presidential election, multiple wars, city moves, two Batman films and lots of time with friends playing songs. These things seem to have inspired the band to make their most aggressive and adolescent album to date. Shipping News has jettisoned the long songs (and glacial tempos) of the past and is concentrating on energetic blasts of noisy rock (with a little gallows humor thrown in). While slipping into a slightly more sympathetic mood once or twice, the new songs ares tripped down and pretty much nasty.

Working for the first time with the kind folks at Karate Body and Noise Pollution (and African Tape in Europe), this album marks the 14th year of the band's existence. "One Less Heartless To Fear" features seven brand new songs and two "oldies" recorded live on a digital multitrack system at the all-ages venue Skull Alley (Louisville) and The O-Nest (Tokyo). Please enjoy the first single "The Delicate" here or by viewing the clip below.

Posted by NOISE POLLUTION at 6:05 PM No comments:

Posted by NOISE POLLUTION at 6:03 PM No comments:

Straight A's will be performing this Saturday (August 13) as part of Actor's Theatre of Louisville's Late Seating concert series. The performances take place on the parking garage roof of Actor's Theatre in lovely downtown Louisville. Tickets are $10. Also performing will be Armaedy, RedShadeBlue and The Pass.
Posted by NOISE POLLUTION at 12:09 PM No comments: 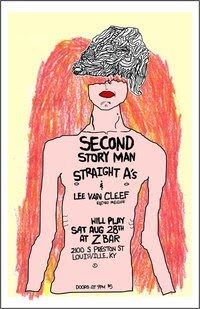 Second Story Man will return to the stage on Saturday, August 28th at Zanzabar (2100 S. Preston) for their first show with new bassist Michael Snowden. SSM will be teaming up again with labelmates Straight A's for this show along with the excellent Lee Van Cleef. LVC will be releasing their new album "Terror, Blood" (Dunkenstein Records) at this show as well. At 3pm on the day of the show, Second Story Man will be performing a special acoustic set at EarXtacy as part the newly relocated record store's anniversary celebrations. A purchase of SSM's Screaming Secrets album at EarXtacy during the instore will get you free admission to the Zanzabar show later that night plus a free copy of their 2006 release Red Glows Brighter. Righteous deals abound!

Posted by NOISE POLLUTION at 11:48 AM No comments: 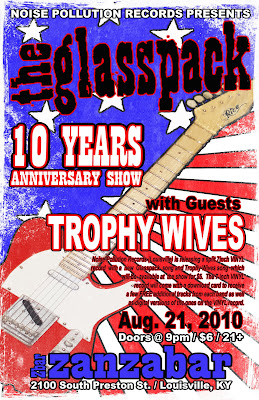 Noise Pollution will be releasing a split seven inch with The Glasspack and Trophy Wives on Saturday, August 21st at a show featuring both bands at Zanzabar (2100 South Preston). The record will be on orange vinyl and contains The Glasspack's "If You Don't Have Anything Nice to Say" (which features Peter Searcy on bass) and Trophy Wive's "Firecracker". Also included in the record will be a download card with both bands' songs from the record plus bonus tracks including a remastered version of Trophy Wive's debut EP, their cover of Crain's UFO Song, live stuff from The Glasspack's set from the 2008 Roadburn Festival in Holland and the 'Pack's cover of Bobby Rush's "Mary Jane". In all, fifteen tracks will be included on the download card. That's a hell of a deal for a measly $5. The show will also celebrate The Glasspack's 10 year anniversary, so the band will be performing an extended set with guest appearances by Adam Neal, Brett Holsclaw, Peter Searcy, Mark Abromavage and more. Cover will be $6, doors at 9pm.
Posted by NOISE POLLUTION at 4:34 PM No comments: